This Gap is Big

Donna Carmical is a co-founder of Grandparents In Action. For Richard Plotkin and  I, “action” is the key word we use when it comes to describing Donna. She is relentless in her advocacy for better outcomes for  children affected by cancer. She is an expert on how the government works and she is undaunted in her efforts to bring issues of childhood cancer to light in the National Cancer Institute,  the House of Representatives and the Senate. If there is an opportunity for childhood cancer to be mentioned in a committee meeting or hearing, Donna is right there in the audience, front and center, and also working behind the scenes to effect change.             Joe Baber, Editor GIA

The first weekend of March was cold and windy and the whole family seemed to be coming down with something. Declan was particularly cranky, out of sorts and just not himself. Stan and Sherri decided to take him to the pediatrician on Tuesday morning. A particularly astute pediatrician noticed that Declan would not look down, apparently a sign of brain swelling. He was immediately sent for an MRI and then a CAT scan which revealed a brain tumor.

On March 9, 2010 Declan underwent his first of several brain surgeries to resect a portion of the tumor and get a tissue sample. Several days later Doctors advised my son and his wife that Declan had a “rare” cancer called AT/RT, they advised that he was terminal, that there had been no research and there weren’t any standard pediatric protocols for treatment of AT/RT. Their recommendation was that we take Declan home, make him comfortable and he would be gone in a few weeks. We were horrified. A beautiful, perfect baby and they were telling us that there were no treatments, no cures, no hope.

After consultation with several pediatric oncology groups, Declan was approved for experimental treatment with a regime of surgeries, chemotherapy and radiation. During the next 6 months after diagnosis there were many ups and downs, moments of hope followed by despair. In June 2010 after proton radiation at MD Anderson in Texas it seemed there was a miracle, all the tumors were gone. At the end of August 2010 the cancer came back with a vengeance and Declan died in the arms of his parents on August 18, 2010. I can’t believe it’s been 5 years, it seems like only yesterday.

Declan was a beautiful sweet baby — child of my son and his wife, grandchild, twin to Cole, brother to Will and Brady, nephew, cousin – he will be forever missed. He left a gap in our lives that will never be filled. We were blessed by our time with him and the memories he left during his short time here on earth. 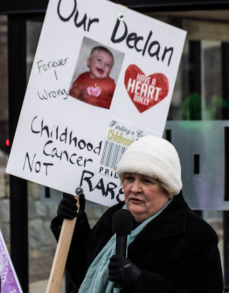 Donna marching at the gates of the National Cancer Institute

Editor’s Note: Donna is one of four co-founders of Grandparents In Action. It is an advocacy organization for Childhood Cancer made up of grandparents whose grandchild was affected by cancer. The organization is now two years old and has over 850 members. Here are other recent posts by other co-founders:

We’re in this Together by Richard Plotkin

6 Responses to This Gap is Big