From my 11 year-old grandson’s perspective, he (Conor) has always had a somewhat

“normal” childhood. He lives in sunny California, enjoys, and is good in school.  He loves mountain biking and surfboarding  with his father. He’s become a real cool, cotton-topped (blond-headed) little surfer dude (young kid in California) and a real wild, radical skateboarder.  I am amazed each time I watch him on his skateboard popping in and out of the deep, dry concrete pools “getting air” and landing safely on the rims as he navigates a particular skateboard park in Coronado, CA. He and all the other kids at the park use all types of skateboarder lingo that I don’t understand, but I love to watch all of them give their safety padding and helmets a good workout. The first time I saw him fall off his board, I got up and ran over to him. Now, just like everyone else, I’ve learned to sit still and say, “Aww, bummer, dude!” After all, in California it’s normal to do that.

“Normal” has been the life Conor’s parents wanted for him since he was 15 months old, just simply an ordinary normal life, nothing more, no fancier than that. That may sound underwhelming to most parents, but let me explain that my daughter Beth Anne and her husband Nick prayed for this after Conor was diagnosed with high-risk neuroblastoma, a deadly cancer that strikes kids mostly under five years old. With this in mind, and what Conor was going through, “normal’ was a reach at best.

Even though his cancer turned my daughter and son-in-law’s lives upside down, they  wanted Conor to have a normal life and did everything they could to make that happen. They did not want cancer to define him in any way or have it be his burden to carry throughout  his life. Conor didn’t remember being in the hospital for months, and his parents never really let him know that they almost lost him to cancer.

As he got older, Conor was getting curious and beginning to notice what his mom was working on.  No matter how hard everyone wanted to keep it away from him, cancer was going to find a way to creep into his life and be a part of it. It all  started to unravel about 3 years ago when his natural curiosity got the best of him. He picked up a  leaflet on his mom’s desk. It was from his mom’s organization she set up to find better outcomes for kids with cancer. He asked her, “Hey mom, why are they using my name, Nicholas Conor on this paper from The Nicholas Conor Institute?”  After that, whenever  Conor asked questions, my daughter answered  them in a very gentle manner and as time passed, she  gave him more and more details about those early years.

Conor never liked the idea of being a cancer survivor and avoided any and all conversations outside of the family. He did not want to be considered “special.” He felt awkward. He really did not care for the reactions he got from strangers when they found out he was a survivor.

One day in school, during a health lesson with a large group of kids, the instructor asked if any one there had cancer or knew someone that did. Conor could not raise his hand. He did not want to be different from the others. Across the room, a boy in his class stood up and said he had neuroblastoma when he was four and talked about it. BINGO! Conor connected with his new best friend who, like him, was a cancer survivor. Afterwards they compared port and surgery scars and so forth. They are very close friends today and the relationship helped Conor to be able to talk about cancer.

Beth Anne decided to bring Conor to Childhood Cancer Awareness Week in September two years ago and involve him in all the activities. It was time to immerse him into the world of childhood cancer. She brought Conor and his sisters, Grace and Cami to Washington, DC where my wife Ellie and I joined up with them. We made a week of participating in such cancer related events as the American Cancer Society’s Lights of Hope, advocating in Congress, attending the Congressional Caucus on Childhood Cancer, visiting the  White House, and finishing with  CureFest on the Capitol Mall with over 1,ooo other advocates on Sunday.

It all came together on Saturday night for Conor at a candlelight vigil in Lafayette Park, just across the street from the White House. It was held to honor the children who died because of cancer. First, our little man and other survivors were recognized. Afterwards, I watched Conor listen intently to each parent who spoke about their child who was taken by cancer. There was complete silence in the huge crowd of about 1,000 as one by one gave very compassionate testimony on what their child and their family went through in their very personal battle against cancer, only to see their child be taken in the end. It was chilling. From there, we all moved silently to the gates of the White House where all of us in unison raised golden flame candles and sang “Amazing Grace.” It was the most moving and chilling event I have ever seen.

When the vigil ended, “normal” was left  behind on a park bench we sat on in front of the White House facing the park where all the parents had talked about their experiences. Conor looked up at me with those big  innocent eyes of his and said, “Grandpa Joe, what do you think about all of this?” Trying to not let my voice waiver, I said, “No one…no one person who was here

tonight will ever forget this moment for the rest of their lives.” I told Conor he was providing hope for others whose children are diagnosed with cancer. No one can even put up a good fight without the hope of victory.  I told him he is that symbol of hope for others that you can beat cancer.

While rubbing the top of his head, I asked him, “What do you think about all of this?” He looked up and replied, “ I am so very, very lucky, Grandpa.” We hugged, I held him close so he could not see the tears in my eyes and at that moment all I could say was simply, “You’re right, you are right.”

On the way back to our hotel we talked more and the next day at CureFest we talked again. We will talk a lot in the coming days, weeks and years. Not only is Conor lucky, but so are we.

Editor’s Note: Joe is one of four co-founders of Grandparents In Action. It is an advocacy organization for Childhood Cancer made up of grandparents whose grandchild was affected by cancer. The organization is now two years old and has over 850 members. Here are other recent posts by  other co-founders:

We’re in this Together by Richard Plotkin

This Gap is Big by Donna Carmical 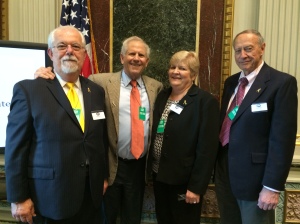